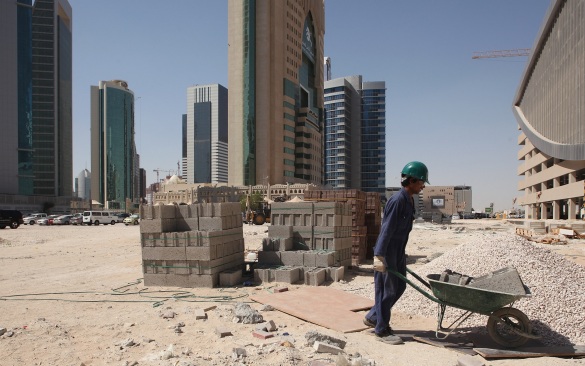 A journalist on a dispatch to one of the most Midas Touch-ed countries, and the hardened people, all imported abroad, who build it.

Welcome to Qatar, a nation, which, decades ago, was nothing more than a string of pearl-fishing villages, but now becomes one of booming nouveau riches, megalomaniac displays of wealth, glitzy, often un-Euclidean skyscrapers, huge shopping malls, and megaprojects flourishing in, thanks to its luck that the country is sitting on the planet’s largest gas field. As it prepares itself for the history’s most expensive game ever made (imagine 220 billion US$ for World Cup 2022 preparation compared to Putin’s squandering a ‘mere’ 50 billion US$ for Winter Olympics in Sochi), the whole nation is prepping up for changes, readying itself for a gargantuan plastic surgery of its own, but oftentimes at the huge expense of millions of foreign migrants who toil laboriously – and more frequently than not, in inhumane condition – to make the dreams happen.

These were air horns, not car horns, and the more the rhythm of these wamp-wamp-wamps emerged, the more it became clear that they were coming from a soccer game. So I walked past the hotel and down an increasingly dingy avenue I’d wandered my first night in Doha, past industrial supply stores and dim small hotels and the garish Oscado Saloon, which was not a saloon but a salon whose young haircutters — all sporting identical Drake-ish squared-off cuts — hung over a rail smoking cigarettes.

And then a left along Al Muthaf Street. There were no more hotels. There was a shisha bar in which men smoked hookah dispassionately under fluorescent light; there was a far brighter Pakistani grocery. There were low dun-colored apartment blocks, nameless and with all the windows unlit, either abandoned or occupied by people who used them only for what hours of hard sleep they could get.

This neighborhood was it — the place where the less well-paid foreign laborers lived, and how they lived.

This was what every service employee I talked to — Pakistani, Filipino, Nepali, Kenyan, Indian, Ghanaian, Bangladeshi — told me when I asked what they thought of Doha. “Only work,” a Ghanaian cabbie said. “Work and sleep.” A Filipino cabdriver, blasting a homemade CD of Queen songs, bemoaned the lack of karaoke options. This neighborhood was it — the place where the less well-paid foreign laborers lived, and how they lived. A place to sleep and maybe eat, quietly and out of the way. The streets were dusty and tired. A woman in an abaya, her sleeping daughter slung over her shoulder, climbed grim yellow steps into an apartment building. An airplane roared up over the rooftops, huge and shockingly close. 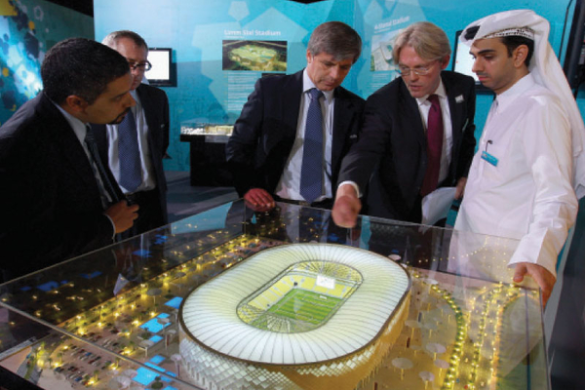 Having been splashed by seemingly endless oil wealth has turned most of the Middle Eastern countries into something like the hands of  Midas – as though everything it ‘touched’ might turn out into gold. Dubai is not hesitant for a complete, skyscraper-lavished ‘plastic surgery’ of its own, building high-rises almost as plentiful as those in Shanghai or any other new-world meccas else. Saudi Arabia is spending hundred billion dollars on the same thing – constructing utopian-like satellite cities, many of which are later uninhabited. (and one prince even once complained that the government only focuses on ‘building building’, not ‘nation building’)

And Qatar is the doing the similitude as well. Having succeeded in inviting numerous Ivy League universities to set up branch campuses in its futurist-inspired Education City, bought the global voices through that newly-born ‘panopticon’ we later know as ‘Aljazeera’, and rebuilt the entire capital, Doha, through a mushrooming number of skyscrapers worth hundred billion dollars, this country, endowed with the world’s 25th largest oil reserves and 4th largest gas reserves, has never truly discovered its own limits of satisfaction. Indeed, it is planning even more: the most expensive World Cup (scheduled in 2022), perhaps if not in the whole planet, the entire solar system may fit in.

The emirate is not poking fun at the media: 220 billion dollars have been prepared to ensure the success of the world’s largest football competition. Whereas the ‘center-of-the-universe’ sensation, 2008 Beijing Olympiad, had had all the world leaders dumbfounded with its 50-billion-dollar series of projects to modernize, and to ‘redecorate’ the capital notorious for its excessively abundant air pollution.

And this 220 billion dollar thingy? That could be similar to Carlos Slim Helu and his two replicants accumulating the same amount of wealth, and unbelievably, a bit higher than the overall GDP of Nigeria in 2011 (with a population of 170 million, its GDP level currently stands at 200 billion US$), or 60 times more costly than previous World Cup in South Africa. Like Aladdin fairy tale were emboldened into reality.

See 5 things around the planet that may be worthy of such tantalizing amount. Click it here.