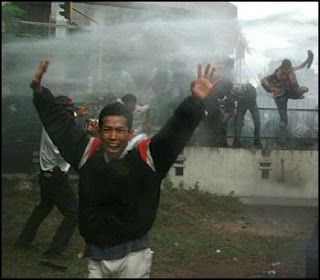 A British expat blogger, under the pseudonym of ‘Jakartass’, recounted his haunting personal experiences – in a rather cynical, dark humor – of surviving in Indonesia’s capital during the May riots, from the beginning of Trisakti shootings, until the resignation of Suharto more than a week after.

Download his full story, a PDF file, in his blog.

Thursday May 14th 9 am
By the time you get this, you’ll know whether Suharto and his cronies have gone or whether they’ve shot a few more students. A mass people march is planned for the 20th and all the signs are that this revolution is now unstoppable.

Suharto has spoken from Cairo: “If I’m no longer trusted (to lead the country), I will become pandito (sage) and endeavor to get closer to God. I will spend my time to guide my children so they become good people … I will do tut wuri handayani (guide from behind).”

I was in the middle of writing the last bit when I was rung by the office ~ we’re shut for today at least. The British Embassy’s advice is to take it day by day. And the news (almost) live on TV is that north and west Jakarta is burning. Are they attacking the Chinese? Fools if they are!

Slightly later: they’ve attacked a cash ‘n’ carry, Goro, owned by Tommy Suharto which is just down the road from my office.

16 years ago, one of Indonesia’s bloodiest tragedies swept across virtually the entire nation. What were initially student protests held against Suharto’s inability to curb corruption, handle economic crises and the following social and political tensions ended up with brutal repression led by security forces. What happened afterwards was a culmination of mass anger, all of which was expressed in savagery unspeakable to levels ever imagined, in particular towards Chinese Indonesians, the major economic and social scapegoats. Shops were looted, malls, and the thousands of masses entrapped inside, were burnt alive en masse, leaving their corpses in complete ashes. Dozens of women, all of whom are ethnic Chinese, were brutally gang-raped, while other thousands saw their properties, houses, and offices perish in flames. Jakarta, the capital of Indonesia, and also the country’s economic and political epicenter during Suharto’s rule, witnessed a brief period of lawlessness, chaos, insurmountable terror, and even societal collapse. And so were a few other major cities, in particular Medan and Surakarta, which were gravely affected by such occurrence.

Ever since Suharto’s resignation, few efforts have been made to bring those responsible to justice. And it even seems that much of the populace has become largely oblivious that this tragedy once happened.

What we need to know is this: when we fail to learn from history, we run high risks of repeating it. We may not forget what has happened in May, and as long as there is no justice brought to the victims, this will remain one of many humiliating points for Indonesia’s human rights record.

Read the complete chronology of Chinese Indonesians in University of Maryland’s Minorities at Risk (MAR), an intensive project covering approximately 283 ethnic minorities across the whole planets perceived to face ‘existential threats’, and how governments are actually failing to protect their rights.

Chinese Indonesians are, resembling the patterns of most market-dominant minorities worldwide, merely another epitome of how vulnerable an ethnic minority, controlling a large stake of a nation’s sector either politically or economically, seems to be. They may not experience the nearly gory, unbearable, deeply inhumane persecution as Jews in Europe, or Tutsi in Rwanda, have encountered, but the May 1998 riots remind us about how, in some moments, ‘self-organized criticality’ could anywhere take place, where minor coincidences are accumulated into an unexpected maelstrom beyond our thoughts.

With numbers currently estimated at approximately 10 to 12.5 million, or 4 to 5 percent of Indonesia’s total population, Chinese Indonesians have a control of nearly two-thirds of Indonesian economy, a figure largely envied by some portions of indigenous population, known as pribumi. Exacerbated by Soeharto’s three-decade authoritarian and corrupt rule, where Chinese Indonesian populace had been largely ‘directed’ to control no more than economic, trading, and commercial sectors and have no legitimacy in politics and academic fields, the ‘financial success’ they enjoyed served as agent provocateur for certain political opponents to scapegoat ethnic Chinese in any racially motivated political incidents. Throughout mid-1990s, a multitudinous number of racist cases had occurred in numerous cities and towns in Indonesia. But the worst was yet to come; the 1997/1998 Asian financial crisis, bulk of which was blamed allegedly on ethnic Chinese running the economy unjustly, had the domino effect on the livelihood of this community.

With crisis worsening, social inequality deepening, and political strife widening throughout Indonesia, Chinese Indonesians were frequently objects of the masses’ dissatisfaction. Shops were ransacked and burned, girls raped and mutilated, men burnt alive, household items pillaged, cars and motorcycles set on fire, banks looted, and economy was dead. And all these ‘minor’ happenings accumulated in the bloody month of May 1998. Medan, Jakarta, and Solo, excluding countless cities and towns, suffered the most severe casualties as a consequence of the all-too-brief revolution. Death toll was estimated at 1000; several human rights groups even claimed as many as 5000. Some pointed out that security forces had orchestrated the attacks; some others accused of a ‘foreign intervention’ in the riots; some blamed government’s failure in realizing social equality among its highly diverse nation. Whatever the accusations, the May tragedy had left a dark chapter on our country’s epoch of history.

A journalist recalls the pictures a photographer took in Glodok, a predominantly Chinese district in West Jakarta, exactly one day after the area was worst hit by the swarms of thugs on 13 and 14 May (including one above).

Note: none of the pictures is graphic, but rather of silenced fear, misery, and uncertain hopes, largely reverberating on how we respond to the trepidation ourselves.

Minorities at Risk, a specialized research project from University of Maryland aimed at monitoring 283 of the planet’s most vulnerable ethnic minorities, releases a full chronology of notorious events largely related to Chinese Indonesians (other than 1998 May riots).

You may also read these articles for more ‘enlightenment’ :

http://www.myindo.com/ebooks/jakarta2039.pdf (an Indonesian author published a graphic novel, set in distant future, about a child, born out of wedlock during 1998 May riots, who retells her horrifying background after reaching the age of 40.)

writes a short story every week

alaska, travel, photography, skiing, and what not