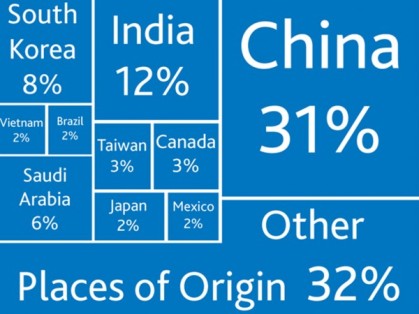 The number of international students admitted in the United States in 2014 is now on its record high. 886,000 – a significant 8% increase compared to last year – is already a burgeoning figure, and this trend continues to increase. What does this mean then? The world still puts its confidence in the superpower – not so much in its ability to lead the global geopolitical order anymore, but rather in its ability to deliver quality education and boundless opportunities to succeed (the American dream to some extent still works). Having nearly half a trillion US$ to spend every year in research, why waste this chance?

But what really strikes out is the structure of international students nowadays. As you can see from the picture above, nearly one-third of all these students originate simply from one country: China. Despite China’s rise as a major, global power, many of these people, exhausted by the country’s over-competitive curriculum system, now resort to overseas studies as an alternative for either their children or themselves to grow. US, in fact, turns out to be the most favored destination. And guess what? 50% of all international students in the country are based simply from three Asian countries: China, India, and South Korea (the third being a principal US ally).

Read the summarized report in Science Magazine to know more about this trend.

And download the infographic to learn more about the facts.