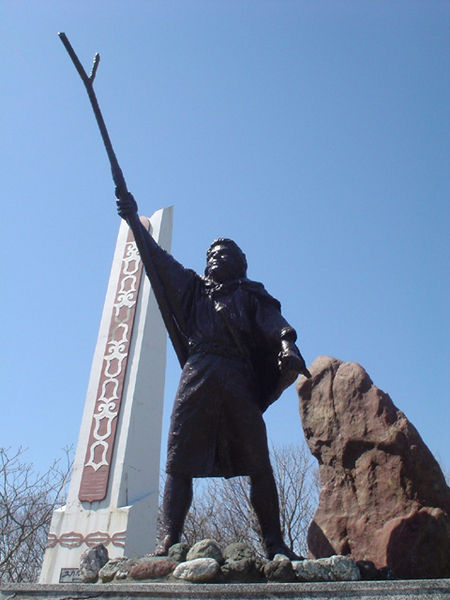 In brief, this is a little-known narrative about a confederation of Ainu tribes living on Japan’s northernmost island, Hokkaido, who contested the legitimacy of the shoguns ruling some parts of the island in mid-17th century, led by an aging chieftain named Shakushain.

Hokkaido is such a familiar feature on maps of Japan that it is easy to forget what a recent addition it is to both the nation and the state. It does not appear in Japanese chronicles until around 1450, and was not formally incorporated into greater Japan until 1869. As late as 1650, the island was known as “Ezo,” and was a distant frontier zone, only tenuously controlled from Edo (modern Tokyo). Even in the 1740s, Tessa Morris-Suzuki notes, maps of the region still showed it “disappearing over the horizon and petering out in a splash of unconvincing islands.” And while it seems always to have possessed a small population of Japanese hunters and merchants, Hokkaido was home to, and for the most part run by, a significantly larger group of indigenous tribes known collectively as the Ainu.

It was not until the 1660s that Japan asserted its dominance over Hokkaido, and when it did it was as a result of one of the most self-evidently doomed rebellions known to history. Shakushain’s revolt, they called it, after the octogenarian Ainu chief who led it, pitting 30,000 or so ill-organized tribesmen against a nation of 25 million, and stone age military technology against the modern firearms of Japan. He lost, of course; just one Japanese soldier died fighting the rebels, and Shakushain himself was ruthlessly assassinated as soon as a peace treaty was signed. But while the Ainu suffered in the short term–enduring an influx of Japanese onto their island, and ever harsher terms of trade–it no longer seems quite so clear who the real victors were in the long run. Today, Shakushain has become an inspiration to new generations of Ainu nationalists.