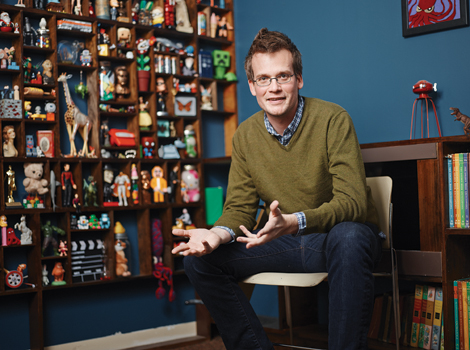 With The Fault in Our Stars released today, let us today take a deep insight into the life of the 36-year-old author behind this best-selling book, and in particular, dealing with his personal experiences of ‘being nerdy’.

All his novels draw on these awkward beginnings, but the most autobiographical is the first, “Looking for Alaska”, in which the hero, Miles, asks his parents to move him from high school in Orlando, Florida to boarding school. Green made the same request at 14 and was dispatched from Florida to his father’s alma mater, Indian Springs School in Birmingham, Alabama. “I was a big nerd, so I was struggling socially at school. But I was also struggling academically, to a point where the course of my life was going to be set in a troubling direction.”

Boarding school is rarer in America than Britain and carries less of the class baggage. Both Green’s parents worked for non-profit organisations, his mother as a community organiser and his father for an environmental group, and they hoped boarding would offer him more security. “I don’t think they stopped worrying about me until I was married,” he says. “Seriously. In high school they were worried because I was petulant and smoked in the house, and was just awful.”

He was being bullied and the transfer request was an act of desperation, “a moment of self-awareness” that boiled down to “90% privilege, 10% good decision-making.” The elder of two boys, he was pegged as the clever one and became “exceptionally good at seeming smart without trying hard.” His brother, Hank, “went to public school, got a full scholarship to college and was working constantly. A hard-driving, intelligent person. He’d grown up with really bad learning disabilities and as often as I’d been told that I was smart, he’d been told that he was stupid. That shaped him in important ways.”

Indian Springs, Green says, “changed the course of my life”. For the first time, he was popular: “not basketball-player popular, but reasonably well liked”. He was funny, erudite, and hung out in a Dead Poets’ Society clique that read Nietzsche (“not well”) and would resurface in his fiction. In “An Abundance of Katherines”, the hero is a social misfit who eventually learns to integrate. In “Paper Towns”, two teenagers wreak small acts of revenge on those who have excluded them. In “The Fault in Our Stars”, the heroes, Hazel and Augustus, find themselves alienated from their peer group through illness—the condition of adolescence made noble through suffering. The point Green makes is that however cut off you feel, somewhere out there your community awaits.

With today’s inauguration of Ukraine’s new president (the country’s Willy Wonka, Petro Poroshenko), the new government will be faced with a greatly daunting task: restore the sovereignty of Crimea, reform the nation’s ill-fated bureaucracy and economic stagnation, and most urgently, resolve the ongoing, worsening conflicts in East Ukraine which have escalated into an all-out war.

And here is this, one of the headaches Poroshenko surely will face: a movement of pro-Russian fighters now occupying an 11-story government office building, proclaiming People’s Republic of Donetsk,, one you unofficially can acknowledge as the world’s smallest republic, and also a highly absurd and farcical one.

The New Republic has dispatched its reporters to cover on this new micronation. Read the full article here.

On the tenth floor, we were greeted by a gang of hoodlums in track pants and beat up pointy leather shoes. One of them lazily pounded a black truncheon into black biker gloves. Another had one propped behind his neck. One young man in a blue t-shirt with ears like an Indian elephant had a Kalashnikov slung across his stomach.

We were told to wait for Yulia and sat around chatting to the hoodlums, who found a Russian and American a curious sight.

“Did you hear that Obama ran away?” said a man with a buzzcut, a blue tooth, and the eyes of a man who knows his way around the city’s alleys.

“Yes, yes,” he said. “He fled the White House and took a helicopter to his ranch in Texas.”

“And you call yourself a journalist,” he smirked. “You don’t even know anything.”