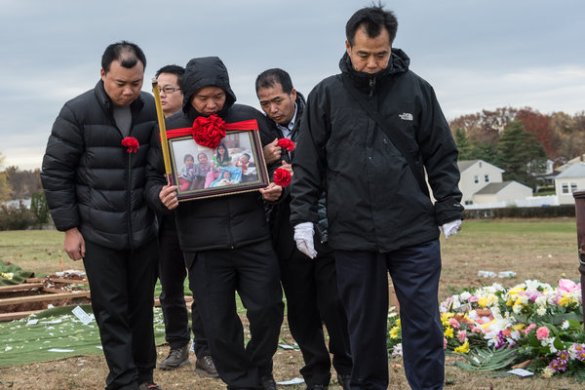 A wife, a child, and three little toddlers: their lives, far before their real success was achieved, ended up abruptly under their mentally unstable cousin’s brutal cleavage-knife attacks. The whole family, one among thousand others hailing from towns, villages, and other settlements surrounding Fuzhou, the capital of Fujian Province, China, which have contributed to new waves of immigration throughout the country in search of the very essence of the American dream, perished, leaving the only surviving member, the husband, and also the father of four, in a deep state of limbo.

Two special reports from The New York Times provide detailed coverage about the family, the murder, and the dismal state of many among the Chinese migrants toiling hard throughout the country, all for the sake of the dream themselves.

First article (The Death of a Family, and an American Dream)

Mr. Zhuo, 41, was one such worker. His cousin, Mindong Chen, 25, was another. Their divergent paths — one on the way up, the other now charged with murder — lay bare the reality of life in this Chinese community: crushing burdens and relentless poverty, permanent for all but a few.

Mr. Chen’s troubles were there for all to see in his postings on Qzone, a Chinese social media service. “Why is the pressure now so great?” he wrote. “The path has been so difficult.”

Little has been told beyond the Chinese press about the people who died and about Mr. Zhuo, the father left behind, and Mr. Chen, the cousin. He is awaiting a hearing on whether he is mentally competent to stand trial for murder.

The killings tore through the family like a fire: sudden and complete. The five murders in the three-room home on 57th Street, where the children and their parents enjoyed a seemingly ordinary life, the police said, stood out for their brutality and magnitude.

It was “not something that has been seen before in recent memory,” said John J. McCarthy, the Police Department’s chief spokesman.

Chief Banks said the scene was one that was seared into memory. He called the crime an “unspeakable act” visited upon a “normal family.”